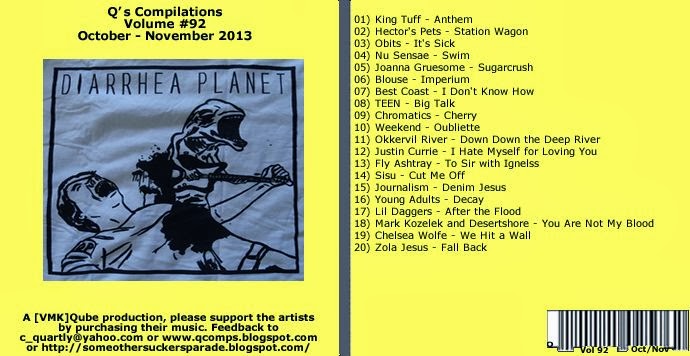 October and November are odd times in the US, the “fall” (it’s still Autumn…) is beautifu, the sun is out and the skies are blue but there is a chill in the air, my kind of weather. Halloween is a big thing and thanksgiving is too close to christmas to know what to do with either. New York recently had the CMJ Music Marathon and I’ve been enjoying writing content for My Social List, here’s some stuff I’ve been listening to lately:

01) King Tuff – Anthem: King Tuff’s self-titled release was one of the best albums of last year, and his debut album from 2008, Was Dead, was re-issued in the summer. This tune opens his eponymous album and having seen him live twice this year I thought it was time I used another track.

02) Hector's Pets - Station Wagon: Regulars on the New York gig circuit for the last couple of years, Pets are one of the most solid live bands you can see and are an infectious act. They’re currently recording their debut album which should be great, especially if they can capture their live sound, this track is more of a demo but you’ll be humming ohhh la la la ohhh la la la before you know it.

03) Obits - It's Sick: I saw Obits at their record release show at the Bell House (which I reviewed here: http://mysocialist.com/blog/2013/09/24/live-review-obits-at-the-bell-house/) in support of new record Beds & Bugs. It’s a fine record and this is probably my favourite from it.

04) Nu Sensae – Swim: I saw Nu Sensae at the Northside Festival in June and enjoyed their ferocious set at Shea Stadium, but it wasn’t until I picked up their record, Sundowning, that I found a better appreciation for them and managed to tease apart the songs.

05) Joanna Gruesome – Sugarcrush: This Welsh band offers a ray of sunshine for the UK music scene, they were one of the best acts to play the recent CMJ Music Marathon in New York in October and their record, Weird Sister, is sure to make many a best-of list for the year. The album has been released on Slumberland Records in the US.

06) Blouse – Imperium: I was also at Blouse’s record release show in support of new album, Imperium, my review can be found here: http://mysocialist.com/blog/2013/09/03/blouse-live-review-glasslands-08302013/. The new album is more guitar-driven compared to the synth-heavy self-titled debut, but the change of direction sounds natural rather than forced.

07) Best Coast - I Don't Know How: After the fairly disappointing second album, The Only Place, which featured a much cleaner sound, new EP Fade Away is a real return to form. Sure, it’s more of a return to the blueprint of their wonderful first album than anything else, but I still think that Boyfriend is one of the best pop tunes of recent times, so I really want them to do well. Let’s hope the upward trajectory continues.

08) TEEN - Big Talk: This tune is a leftover from the sessions that spawned their last ep, Carolina. I love the big synth sound and eagerly await more!

09) Chromatics – Cherry: I saw Chromatics at Terminal 5 in September, almost exactly a year since I saw them at the New Museum last year (which was in my top 5 shows of the year) and they were once again fantastic. This track appears on the recent label sampler from Italians Do It Better called After Dark 2.

10) Weekend – Oubliette: Jinx is one of the finest albums of the year and while it has been available in the US for a few months, it finally just got a worldwide release. Not exactly the easiest band to find on google (and their debut album was called sports, just try finding Weekend Sports!), as with most things people consider to be dark and eerie, I hear a beautiful record.

11) Okkervil River - Down Down the Deep River: One of the most consistently great bands of the last decade, Okkervil River deliver another rewarding record in the shape of The Silver Gymnasium, which is a concept album based in New Hampshire in 1986. I haven’t dissected the lyrics enough find myself in that world but the music is of their usual high calibre.

12) Justin Currie - I Hate Myself for Loving You: New record, Lower Reaches, took me a little longer to get into than Justin’s two other solo records, it might be the more country influence (it was recorded in Nashville) or it might just be that my expectations for the man who sparked my love of music are just too high. Regardless, I ended up really liking the record in the end anyway. And to make things even better, Del Amitri are touring in the UK for the first time in 10 years starting in January next year. I’ve already booked tickets for a couple of shows, now I just need to figure out getting there!

13) Fly Ashtray - To Sir with Ignelss: Described recently as “one of New York’s best kept secrets of the last 30 years”, this track was co-written with R. Stevie Moore and appears on Reports. I managed to catch a rare set by the band at Cake Shop a couple of weeks ago.

14) Sisu - Cut Me Off: Keen listeners will remember Sandra Vu’s band Sisu from Q#90 and Q#88, since then debut album Blood Tears has dropped and I heartily recommend it. They played my favourite set of the recent CMJ Music Marathon and Vu has really grown into the role of band leader.

15) Journalism – Denim Jesus: A recent discovery, I saw Journalism supporting Guantanamo Baywatch at Cake Shop and was an instant convert. There isn’t a whole lot out there to listen to at the moment so do enjoy this. I love their sound and just wait for the solo… My post about them on My Social List has turned out to be my most popular as well so take a look if you want: http://mysocialist.com/blog/2013/11/05/artist-to-watch-journalism/

16) Young Adults – Decay: Boston-based band Young Adults excel on this noisey/shoegazey/post-punky tune, I wanted to see the band recently but their show conflicted with another so I hope it isn’t too long until their gigging again. For more information see their bandcamp page http://youngadultsma.bandcamp.com/

17) Lil Daggers - After the Flood: One of my favourite recent discoveries, this track opens their superbly titled EP, No Pizza No Peace, and is a perfect dose of atmospheric psych-rock. This track even caused me to miss my subway stop late at night one time as its swirling production  dulled my senses (ok it could have been the beer). I had to fade this song a little earlier than I’d have liked due to time constraints.

18) Mark Kozelek and Desertshore - You Are Not My Blood: Kozelek has been pretty active this year, with a covers album, 3 live albums and 2 collaboration albums. This track is the closest thing to early Red House Painters he has released since even before Red House Painters broke up.

19) Chelsea Wolfe - We Hit a Wall: Latest album, Pain is Beauty, is a real success of different sounds and styles. This brooding piece is my favourite.

20) Zola Jesus - Fall Back: New album, Versions, is a collection of re-arranged song for strings courtesy of JG Thirwell. The new versions are brighter and bring the vocals to the fore, which is a good contrast to the electronic and dense original songs.

This is one of the most gratifying mixes I’ve made in a while so I hope you enjoyed it. The next mix will be a roundup of my favourite releases so I suppose I’d better get my thinking cap on for that. See you in 2014!

Until next time
Peace and love - Q