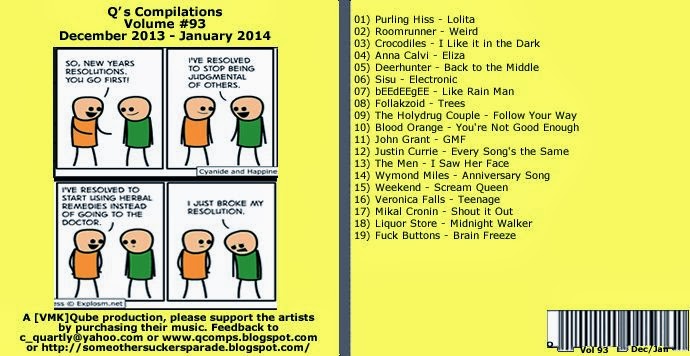 Happy new year! As usual, this mix is a roundup of my favourite music of the previous year (unless I already used a track or couldn’t fit on due to time constraints blah blah, etc, etc). 2013 was a really great year for music, both recorded and live (I went to 154 shows in 2013!), and I started writing for My Social List which is definitely a highlight!

01) Purling Hiss – Lolita: A latecomer to the mix (though this album, Water on Mars, was released in March), I saw Purling Hiss at Brooklyn Bazaar in December and their fuzzed up Crazy-Horse-esque guitar wigouts blew my mind.

03) Crocodiles – I Like it in the Dark: One of the surprises of the year for me, Crocodiles have upped their game with recent release Crimes of Passion, and this song is a wonderful atheist-call-to-arms anthem. “there’s no shining heaven, there are no fires of hell but those of our creation. When I’m crawling away from hell, storm the gates of heaven and be your own god”

04) Anna Calvi – Eliza: Clearly Anna was not going to suffer second album syndrome with the release of One Breath, which is a great follow-up to her exquisite debut album. “So priceless and godless I wait, To leave this soul behind, Untangle the jangle of bells, They ring my fear through the night”

05) Deerhunter – Back to the Middle: I finally got to see Deerhunter this year (which was my favourite show of the year - http://someothersuckersparade.blogspot.com/2013/12/my-favourite-shows-of-2013-and-my-list.html). They played an incredible setlist but didn’t skimp on the new stuff either, Monomania is their attempt at a glam rock record. “Back in the middle, Everyone knows your name now, It's all accidental, Your love is such a sick, sick game”

06) Sisu – Electronic: Another act I can’t really say anything new about, having featured in Q#92, #90 and #88. Light Eyes made my albums of 2013 and it’s no surprise to see them on this mix. Electronic is a moody, slower track than some of the other ones I’ve used previously.

07) bEEdEEgEE – Like Rain Man: Brian DeGraw is a member of Gang Gang Dance, and released his first solo album under the moniker of bEEdEEgEE, I saw him do a set at Union Pool in the summer and it was mesmerising.

08) Follakzoid – Trees: The best thing of 2013 in a music sense was my discovery of Chilean psychedelic bands (see Q#89), and Follakzoid’s album, II, was my second favourite release of the year.

09) The Holydrug Couple – Follow Your Way: Where Follakzoid are, The Holydrug Couple are not often far behind, I saw the two bands at the Mercury Lounge in February for one of the best shows I have seen in a long time. They come from different sides of the psyche spectrum and complement each other perfectly.

11) John Grant – GMF: Although this record was released earlier in the year I didn’t get round to appreciating it until almost the very end. I saw him play an incredible show at the Music Hall Williamsburg in December and he gave one of the best vocal performances I’ve ever heard. The album, Pale Green Ghosts, is a lyrical masterpiece, bitingly sarcastic yet open and vulnerable. GMF is a sort-of counterpoint to all those moments of self-doubt and hatred. “You could probably say I'm difficult, I probably talk too much. I over analyze and overthink things.
Yes, it's a nasty crutch. I'm usually only waiting for you to stop talking, So that I can.”

12) Justin Currie – Every Song’s the Same: Hero worship is something I try to shy away from, but Del Amitri’s influence on my formative years is substantial, Justin released his third solo album, Lower Reaches this year, recorded in Nashville it has a slightly more country flavour than his previous work and it took a few listens for things to seep in. However, his sense of melody and songwriting prowess meant it didn’t take all that long.

13) The Men – I Saw Her Face: Another record that made my best of 2013 list, New Moon is a fantastic record and this is probably the most obvious example of the Neil Young influence on it, you could plonk this record onto Zuma and I doubt anyone would notice!

14) Wymond Miles – Anniversary Song: A man who seemingly can’t write a bad song, Wymo is best known for his work as the guitarist in Fresh and Onlys, but his solo work is even better IMO. Cut Yourself Free is his second album, following on from the resplendent Under the Pale Moon.

15) Weekend – Scream Queen: You should be familiar with, Jinx as I used Oubliette on the last mix, but it really is one of the best records of the year so it had to feature again. “You fell in love with a fragrance in a magazine. A scream queen, pleading at the door to a dream”

16) Veronica Falls – Teenage: Another band that said “fuck you” to the idea of second album syndrome, Waiting for Something to Happen is a massive step up from their charming self-titled debut, with a punchier sound and more confident performance, it was hard to pick a track to use. “Driving late at night I’ll let you listen to the music you like. Then I’ll drop you home”

17) Mikal Cronin – Shout it Out: Another double whammy in that Mikal Cronin made both my lists for best albums and shows of 2013 with his Bowery show that also featured Roomrunner and Shannon and the Clams. It is hard to pick a highlight from II because it is consistently strong. “I'm pretty good of making things out of the scene, and turning problems back to me“

18) Liquor Store – Midnight Walker: I saw Liquor Store live 4 times in 2013 and their second album, In the Garden is a fun romp of unashamed classic rock, this tune features some ripping guitar work to boot.

19) Fuck Buttons – Brain Freeze: I featured Stalker on Q#91 and Slow Focus sees Fuck Buttons in fine form after a few years of little activity. After seeing them live I noted that “when our robot overlords take over they will march to this”, and I can’t think of a better way to describe this song.

I have of course missed many great bands/songs/albums in this “best of” mix, many will crop up in the next volume. Brain mush dictates that these notes can’t be any longer…