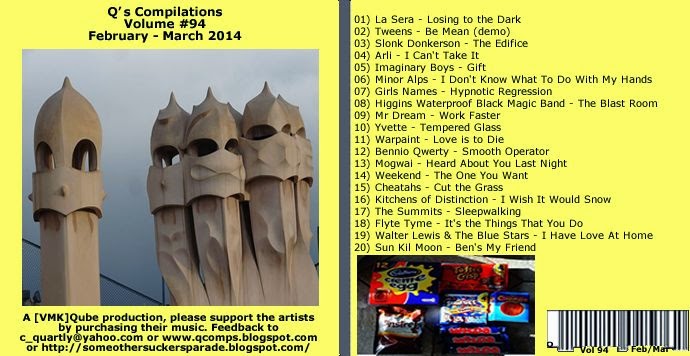 It’s the middle of March and it’s still freezing, this winter is getting everyone down. Anyway, let’s move on, it’ll be spring soon or maybe we’ll just skip straight to summer… February was still cool, I went home to the UK for a couple of weeks to see Del Amitri’s first shows in over a decade, also hit Barcelona for a few days for a change of scenery. This is the first “proper” compilation of the year and features the usual mix of things that probably should have been on the previous mix, new stuff and old stuff that I’d wanted to use for a while. Hope everyone likes what they hear!

01) La Sera - Losing to the Dark: Vivian Girls recently played their last ever shows (my review), but bassist Katy Goodman rolls on with her third La Sera album, Hour of the Dawn, which will be out on the 13th of May. This is the first track from the album and certainly bodes well! “How about you write another song, About how fun you are to drink with at the bar”

02) Tweens - Be Mean (demo): Tweens’ debut album is out on the 8th of April and promises to be a cracker! I saw the band last year and loved their set so promptly ordered their demos CD-R, also really looking forward to their set at Death By Audio on the 3rd of April. This demo is a bit more ragged than the final result but there is a lot of charm. “Loving you is such a bore, there must be something wrong with me”

03) Slonk Donkerson - The Edifice: I’d seen the name around a bit last year but finally got to see Slonk Donkerson in January and loved what I heard. A classic power trio with shades of Husker Du and even a bit of Moving Pictures/Signals-era Rush in some of their songs. This track is from their second album, imaginatively titled II.

04) Arlis - I Can't Take It: I’m not quite sure why it took me so long to buy Numero’s It’s Pop compilation (especially after loving their later released Buttons mix of a similar theme), but a gift card for Bullmose record shop around Christmas time sorted that out. When there are so many good tracks on another comp it’s hard to pick one or two for my own mix but this one wormed itself into my brain and here we are. “I’ve seen your picture somewhere and it’s bugging me to no end”

05) Imaginary Boys – Gift: Quite often I’ll browse the calendar on My Social List and check out a bunch of bands I haven’t heard of before, one of those bands was Imaginary Boys who had just released their debut EP, Limerence, which I ordered pretty swiftly.

06) Minor Alps - I Don't Know What To Do With My Hands: Matthew Caws (Nada Surf) and Julianna Hatfield should need little introduction and they combined for what must be one of the most natural sounding side-projects of all time in Minor Alps. The album sounds exactly as you would expect, expertly crafted indie-pop tunes. “The couch is an island, a desert oasis, the room is a spaceship, and you're an undiscovered planet”

07) Girls Names - Hypnotic Regression: I saw Belfast’s Girls Names’ first ever US show at the Cameo Gallery in March last year and really enjoyed their set, so it was rude not to buy their album, The New Life, when Slumberland Records had a major sale a couple of months ago. Upon further listens, it may just be the most under-appreciated record of 2013.

08) Higgins Waterproof Black Magic Band - The Blast Room: A new band from TV On the Radio’s Tunde Adebimpe. I picked up their self-titled EP recently from Other Music and to be fair if someone told you it was TVotR they’d probably believe you. That’s hardly a bad thing though, since they are probably the best band since the turn of the millennium.

09) Mr Dream - Work Faster: There’s a bit of a Talking Heads vibe here in places but otherwise Mr Dream offer a slightly twisted post-punk romp here. I first heard Mr Dream on a compilation from GODMODE records (they issued Yvette’s stunning album, see next track…). They’re in the process of putting together a record so I’m really looking forward to seeing what they come up with.

10) Yvette - Tempered Glass: I liked Yvette’s 2013 album, Process, last year, but then I saw them live and in particular, bought the album on vinyl, it blew my mind (recorded at Silent Barn, Brooklyn). What a revelation! If you can get it, stump up the cash. It’s hard to describe their music; dark, intense, lots of effects and layers… just listen!

11) Warpaint - Love is to Die: The band took their time releasing their second album (self-titled) with almost four years passing since The Fool. It’s definitely a continuation of what they had previously put together, dreamy vocals and a tight rhythm section, they could put out 10 records like this and I’d be quite happy. The first listen to the album was a little disappointing, but the melodies started seeping in after a couple of goes.

12) Bennio Qwerty - Smooth Operator: I recently profiled Bennio Qwerty in a recent Artist to Watch post, and am really looking forward to seeing them live supporting Tweens in April. This one is definitely for fans of Dischord Records. The band have two EPs to their name so far, and this track is from Picture Of.

13) Mogwai - Heard About You Last Night: Mogwai do what they do, and they always do it excellently! Latest album, Rave Tapes, has a few quirks with the addition of synth bass and some more keyboards than normal.

14) Weekend - The One You Want: I didn’t really want to use Weekend again so soon but I bought their Red EP recently and it’s great and I felt like this track fit the vibe of the compilation at this stage. You can’t really fight such things!

15) Cheatahs - Cut the Grass: Their self-titled debut album came out in February and delivers on the promise of the two EPs. It’s unashamedly Swervedriver-esque, which is cool by me. I recently saw them at Baby’s All Right and they have even more oomph in on stage.

16) Kitchens of Distinction - I Wish It Would Snow: Certainly one surprise comeback (albeit only in the studio, no live dates planned) was Kitchens of Distinction, one of the most underrated bands of the last few decades. Folly was released last year and I made sure to pick up a copy when I was back in the UK last month, the record is a bit more subdued than their past endeavours and at times misses that beautiful guitar sound that made them so great, but it’s a lovely little album, and as I said, unexpected! I hope they continue.

17) The Summits – Sleepwalking: Time for a brief soul and funk interlude (courtesy of Numero), something that has been a bit lacking on the mixes recently. This one is from the Eccentric Soul: A RBG Production, on which 4 tracks by The Summits appear. Great bass, vocal harmonies, they should have been huge.

18) Flyte Tyme - It's the Things That You Do: One of the best compilations released in a long time is Numero’s 2-CD Purple Snow, which is an incredible collection of soul/sunk from Minneapolis. As well as an infectious bass and keyboard line, you’re treated to a ripping guitar solo. Enjoy. If you don’t, I’m not sure blood pumps around your heart.

19) Walter Lewis & The Blue Stars - I Have Love At Home: Here’s another track from Purple Snow, a chilled out jam which manages to blend smoother soul with grit and heartache.

20) Sun Kil Moon - Ben's My Friend: New album, Benji, has been rightly gobbling up a lot of media praise, which is a little odd for longtime fans because it isn’t exactly different from what Mark Kozelek has been doing up to this point. The songs on Benji are strong, though. The album itself is a bit of a massacre, I’ve never heard so many people dying in the lyrics to songs before, must be a record! No deaths on this song though, which brings the album, and compilation, to a close. I’m not sure anyone else can sing about buying $350 lampshades and eating crabcakes and make it sound so compelling, however. “She said I seemed distracted and asked what was going on with me, I said I can't explain it it's a middle age thing, She said okay and ate her eggs Benedict, And I looked at the walls cluttered with sports bar shit”

And there you have it. Please let me know if you enjoyed anything on the mix!!!

Please note that the zip file has a password: Q94
Download mix from: https://www.mediafire.com/?2nncdnpdcbbbfr2
Posted by Chris Quartly at 12:11