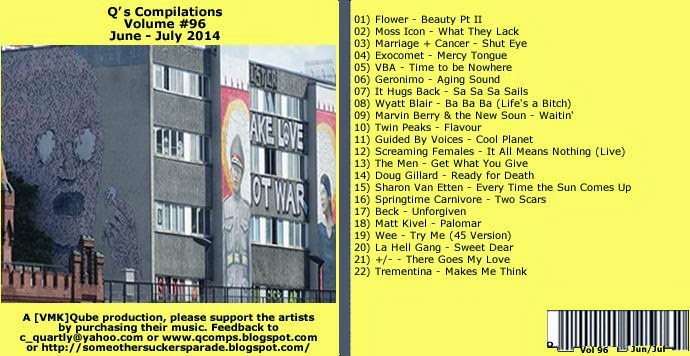 Busy times, it was my birthday on the 13th of June (for the second year running the only thing I got was a card in the post from my grandparents, I’m just too popular!) and I managed to go back home for a couple of weeks. I also went to Berlin for a few days for a change of scenery and of course, the world cup has been on (well done Germany!). I’d made this mix before I went away but am only just getting to the notes now. Hope everyone is enjoying summer.

01) Flower - Beauty Pt II: NYC band Flower have always rather criminally flown under the radar and were only active between 1986 to 1990. However, they played for only the second time since then (I think) at Cake Shop (on my birthday no less). You can download Concrete Sky from their bandcamp page and pay what you want (or nothing): http://flowernyc.bandcamp.com/releases

02) Moss Icon - What They Lack: Another slight blast from the past, I saw Moss Icon two years ago with Bitch Magnet (another very rare live experience) and they played a fine set. The reason for their inclusion here is that I found their complete discography on triple vinyl for $10 at a record fair. Quite the bargain.

03) Marriage + Cancer - Shut Eye: Here we are in the present, formerly known as Nucular Animals (I hope the spelling mistake was deliberate!). The band are from Portland, Oregon, but don’t seem to fit in with the typically sunnier or bubblegum garage rock that comes from the west coast and all the better for it. This is from their debut release, the Demonstrations Tour Tape, which they had unfortunately ran out of when I saw them in New York.

04) Exocomet - Mercy Tongue: Another band who have changed their name (though for the life of me I can’t remember or find what they used to be called), I saw them play at Death By Audio in March and really enjoyed their dark, surf-like rhythms. You can listen to their self-titled record here: http://exocomet.bandcamp.com/album/exocomet

05) VBA - Time to be Nowhere: VBA are another relatively new band, I caught them at Cake Shop in April along with Protomartyr and Spray Paint. They’re certainly a striking live band, with drummer/vocalist Vince Nudo (who is also in Priestess) driving everything forward with some force.

06) Geronimo - Aging Sound: Chicago band Geronimo have just released new album Cheap Trick on Exploding in Sound records. I caught them at Shea Stadium recently supporting Purling Hiss and was impressed enough to pick up the record. “Rock is a young man’s game, and an old man’s curse”

07) It Hugs Back - Sa Sa Sa Sails: I used a track from this Kent-based band on a mix probably about 5 years ago or more but then they fell off my radar (the song was from a 4ad sampler I seem to recall). I saw their last album, Recommended Record at a record fair for $3 so picked it up and was impressed with the blend of pop sensibilities but also some kraut and prog influence. The band are currently recording their fourth album.

08) Wyatt Blair - Ba Ba Ba (Life's a Bitch): Wyatt Blair seems to be one of the nice guys, and just as importantly, seems to be one of those people who can’t write a bad song. Whether it comes to solo recordings such as this, or drumming for Mr Elevator and the Brain Hotel or filling in various roles in other bands (as well as running his own record label), there’s definitely a hallmark of quality throughout. This bubblegum pop tune is from his Banana Cream Dream record (http://wyattblair.bandcamp.com/releases).

09) Marvin Berry & the New Soun - Waitin': Yes, spot the great Back to the Future reference. Another band on Don Giovanni records, I saw the band at Brooklyn Night Bazaar and immediately picked up the record, Bootleg, which is a complete and unashamed jangle-fest.

10) Twin Peaks – Flavour: I caught Twin Peaks last year in November at Baby’s All Right but they are about to release their second album, Wild Onion, in August. Flavour (I just can’t bear to type the American spelling) is possibly the band’s best song I’ve heard yet.

11) Guided By Voices - Cool Planet: I simply can’t write anything about GBV that hasn’t been said before. This is the title track from their latest album and I managed to catch a full-on, 50-song set at the Bowery Ballroom recently.

12) Screaming Females - It All Means Nothing (Live): Screaming Females are quite possibly the best live band around right now and I have seen them three times this year, so it’s a great thing that their latest release is Live at the Hideout. Recorded by Steve Albini, it does a pretty good job of capturing their live sound.

13) The Men - Get What You Give: Some things seem to be guaranteed in recent years, global population rises, I still look like a mangled harpy eagle and The Men release a great album. Tomorrow’s Hits sees the band tread into commercial rock territory, but they do it so well.

14) Doug Gillard - Ready for Death: Gillard’s CV is littered with a who’s who of indie rock credibility and is currently a member of one of my favourite bands, Nada Surf. The recently released Parade On sees Gillard take centre stage with a collection of pop gems that deserve to a wide audience. “I’ve seen enough of this world to know there probably is no god, no place for souls to go, but I’m ready for death”

15) Sharon Van Etten - Every Time the Sun Comes Up: Fellow Ditmas Park resident Sharon Van Etten has just released Are We There, which sees her carry on the excellent work of 2012’s breakthrough record, Tramp. Early reviews suggested that the record was a happy one, but I certainly wouldn’t call it an upbeat record! It is however, another delightfully rounded record and should make many an end of year list. “I washed your dishses but I shit in your bathroom”

16) Springtime Carnivore - Two Scars: I recently went to La Sera’s record release show in Brooklyn for new album, Hour of the Dawn. Greta Morgan plays in La Sera but her own project, Springtime Carnivore, opened the show and I was wowed by her songs and souful, yet delicate vocal. Two Scars has a beautiful, wistful, timeless quality. “Who's gonna love you the best?
Who will meet you in the wild? Tell you apart from the rest Let you be, let you be as you are
FIXING TWO SCARS “

17) Beck – Unforgiven: My favourite Beck album is 2002’s Sea Change, so I was particularly excited to hear that latest album, Blue Moon, would be in that vein. I saw him play a pretty intimate acoustic set at Le Poisson Rouge earlier in the year as well and he is always a great live performer. “Down on the street, Just let the engine run, 'Til there's nothing left, Except the damage done”

18) Matt Kivel – Palomar: You know you’re onto something when you use the same artist on consecutive compilations. I saw Matt Kivel in April and pre-ordered his split-vinyl with Tim Woulfe, the record arrived last month and it’s another lovely addition to his discography, which has actually just grown again with Days of Being Wild, which was released on the 8th of July on Woodsist.

19) Wee - Try Me (45 Version): Numero struck gold again when they released Wee’s You Can Fly On My Aeroplane, which is a delightful, synth-washed soul extravaganza. There are moments where it doesn’t quite come together but when everything clicks, like this song, it’s hard to find better.

20) La Hell Gang - Sweet Dear: Chilean band La Hell Gang were featured on my Chilean mix (Q#89) but I’m excited that they have signed to Brooklyn based label Mexican Summer (here’s a little thing I wrote: http://freewilliamsburg.com/chilean-band-la-hell-gang-sign-to-mexican-summer/). I’m hoping that means there are plans to bring them over here for a few shows.

21) +/- - There Goes My Love: +/- played the same show as Flower at Cake Shop on my birthday, both bands feature James Baluyut. Jumping the Tracks is the band’s first album in 6 years and this tune jumped out at me during the show, I’m a sucker for odd time signatures and this 7/4 rhythm is one of those that is great to pay attention to.

22) Trementina - Makes Me Think: To close the mix we’re heading back to Chile, I can’t actually remember how I stumbled on this band, I was probably just trying to find yet more Chilean bands on various search engines. The My Bloody Valentine influence is pretty obvious here. The band are due to release their debut album in August so stay tuned.

And there you have it, plenty of recent releases again which I hope people appreciate. I don’t know what’s coming up really, now that the World Cup has finished I have to go weeks without watching any football!

Please note that the zip file has a password: Q96
Download mix from: https://www.mediafire.com/?7d4a8bjn7xv4eq5
Posted by Chris Quartly at 14:31