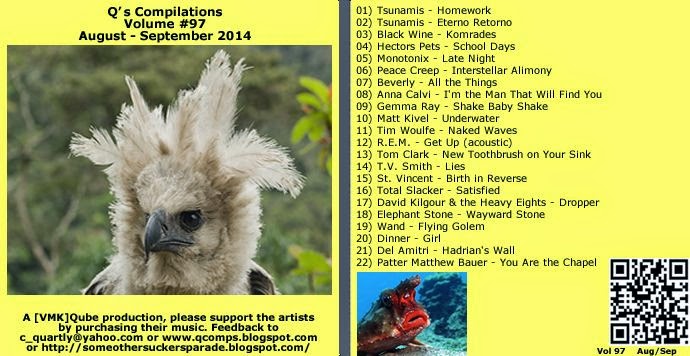 Well hello, everybody. Summer is coming to an end, although September seems hotter than most of the summer combined… anyway, enough about the weather. It’s a case of good news / bad news at the moment. The bad news, and it is rather terrible, is that my favourite music venue, Death By Audio, is closing at the end of November, I can’t even accurately portray how much I like that place… as for the good news, well, I did get to interview my favourite musician of all time and someone whose music changed my life, Del Amitri singer Justin Currie (http://freewilliamsburg.com/interview-justin-currie/). So that was cool… anyway, this mix is the usual mishmash of things I’ve been listening to and seeing live lately.

01) Tsunamis – Homework: Cast your minds back to Q#89 and my fantastic Chilean mix (if I do say so myself) and you may remember Tsunami’s incredible song, Rosita Queen. Well, the good news is that after a few years absence, the band are getting back together! This is basically just an intro song that I’ve edited because it’s the next track that I wanted to include…

02) Tsunamis - Eterno Retorno: These two tracks appear on 2012’s EP Crac!, which is a bit more polished than their other records, but the songs are still wonderful. This popped up on a shuffle the other day (not a feature I usually use but it’s nice to mix things up from time to time) and it always jumps out at me when I listen to the band.

03) Black Wine – Komrades: This track opens the band’s latest record, Yell Boss, which was released in August. I went to the record release show at Death By Audio which also included labelmates, Brick Mower. The new record (released on Don Giovanni records) hits a little harder than their previous record.

04) Hectors Pets - School Days: I was surprised that I hadn’t used anything from Pets’ debut album, Pet-o-feelia, which was released at the end of May. I’ve been watching the Pets live with some regularity over the last couple of years and was wondering if they’d be able to capture the essence of their live shows on record, thankfully they have.

05) Monotonix - Late Night: I saw guitarist Yonantan Gat play at Death By Audio a while ago and after some digging around found he was in an Israeli band called Monotonix. During the last few days of Kim’s Record Store (RIP) I picked up a stack of vinyl and CDs, including a couple by Monotonix. This track appears on their record, Not Yet, and has a really chunky guitar sound, like Swervedriver in overdrive.

06) Peace Creep - Interstellar Alimony: San Francisco’s Peace Creep put out a self-titled EP this year on Alternative Tentacles and it is an unashamed in-your-face SST-influenced rocker.

07) Beverly - All the Things: You may remember the fantastic Honey Do demo from a couple of mixes ago, well now the band have released their first album proper (Careers), another purchase from Kim’s (RIP, yes I will say that each time). This tune has a lovely uplifting arpeggio and now I’m typing this I realise I probably don’t use enough of those…

08) Anna Calvi - I'm the Man That Will Find You: Covers albums and EPs are nice enough but one always hopes they’re just stepping stones before new original material. Having said that, Calvi’s covers EP, Strange Weather, features a nice mix of modern and classic material. This particular tune is originally by madcap Kiwi, Conan Mockasin. “Listen to your heart,When feels right from the start.
Your empty kind of strange, Yours is for the past. Listen to your head, When you're drowning every day”

09) Gemma Ray - Shake Baby Shake: I can’t remember how I heard this song… I think I was just browsing through show listings and finding tunes by unfamiliar names, but I could be wrong. Anyway, on first listen this tune seemed a bit standard but then I found it was in my head with some regularity, so I’m putting it on the mix. I saw Gemma live a few weeks ago and she didn’t play this, which was a shame and the other material didn’t seem as interesting, but I like how this builds and the strings rising to a crescendo.

10) Matt Kivel – Underwater: Ok so Matt Kivel has now appeared on the last three mixes, call me unoriginal, but they are three different releases. This tune appears on his just-released 2nd full-length album, Days of Being Wild.

11) Tim Woulfe - Naked Waves: Speaking of Matt Kivel, you may remember the last mix featured a song by him called Palomar, that featured on a split EP with this man, Tim Woulfe. The lo-fi production is endearing rather than distracting and Woulfe has one of those voices that on first listen sounds basic but further listens reveal an earnest depth. “And I want my songs to remind me of how I felt.”

12) R.E.M. - Get Up (acoustic): This is an oldie but this year REM officially released both of the VH1 unplugged sessions. It’s quite amazing to think that this song was released as a single in September 1989… twenty-five years ago. As Stipe sings in this song, Where Does Time Go?!

13) Tom Clark - New Toothbrush on Your Sink: Tom Clark hosts The Treehouse at 2A on Sundays (25 Avenue A, corner of East 2nd), I went a few weeks and enjoyed his set of Byrds-esque originals. And you never know who is going to turn up at the sessions, Lenny Kaye got up and played a short set when I went. Sorry for the abrupt start, it’s how the song came down. “You had something else in mind, I guess you thought was better”

14) T.V. Smith – Lies: I picked up the hard-to-find album Channel 5 from Kim’s (RIP) recently, it had been on my radar for a while after watching a documentary about him and how it seemed like the underappreciated ugly-duckling in his discography. It’s a lovely little album with some real pop sensibility that I guess fans just weren’t into at the time. Just listen to that guitar at 3:20, gorgeous.

15) St. Vincent - Birth in Reverse: I bought the St Vincent album with a Best Buy voucher a few months ago and have to say, I wasn’t buying into the hype at all, it seemed very disappointing. However, I went to see her in Prospect Park last month and she really won me over, a great performer, singer and guitarist. I certainly enjoy the album a lot more, just goes to show the power of live music.

16) Total Slacker – Satisfied: NYC’s Total Slacker had been playing most of the songs on Slip Away for the last couple of years (it was released in February) and again there was a question of whether or not the band’s fiery live performances could be captured on record, and again the answer was yes! The band have since parted ways with guitarist David Tassy which was a shame as I thought he was fairly integral to their live appeal.

17) David Kilgour & the Heavy Eights – Dropper: I recently saw The Clean live in Brooklyn (review: http://freewilliamsburg.com/kiwi-legends-the-clean-played-rough-trade/) and also managed to score a copy of David Kilhour’s latest solo album End Times Undone, which is a fine mix of jangle-pop and Neil Young-esque guitar wigouts, of which this is a fine example.

18) Elephant Stone - Wayward Stone: I saw Elephant Stone recently at the Mercury Lounge, having missed out on seeing them last year due to conflicts in schedule. This track is more of a nod to their previous records with that lovely jangley sound, but most of the Three Poisons taps into a sound a bit more like 90s Britpop (but is, thankfully, a bit better than most of that turgid movement (save a few highlights)). Always looking back on tomorrow but never thinking of you.

19) Wand - Flying Golem: I missed Ty Segal this time around in NYC (actually for the second time around…) but I did manage to catch Wand (who are one of his openers on this tour) at Death By Audio and you can immediately hear why he has taken them on tour with him.

20) Dinner – Girl: Anders Rhedin is from Denmark but currently lives in LA and has just signed to NYC-based record label, Capture Tracks. This has a wonderful, lo-fi electro-goth sound to it. Fans of John Maus will no doubt get into this. They played at Baby’s All Right this month but I didn’t end up going, hopefully there will be another chance in the future.

21) Del Amitri – Hadrian’s Wall: It’s been quite the year for Del Amitri fans, Justin Currie has released his third solo album and Del Amitri played some reunion shows (their first in 12 years), to cap things off, they just put up a couple of new tracks on their soundcloud page. This song has some great orchestration with sweeping strings, not something the band used too often.

22) Patter Matthew Bauer - You Are the Chapel: A former member of The Walkmen (who broke up), Peter Matthew Bauer has produced a rather spiffing solo record called Liberation! It almost seems like a shame to take a song out of context with the record which has a great flow to it.

And there we have it, I hope you enjoy something on this, as always. I have some ideas for the next one (I might do a Death By Audio – RIP mix) but it could just end up being the standard mix of whatever I’ve seen live or listened to lately. The two pictures are animals that look like me. On the front a Harpy Eagle and flipside is the red-lipped batfish

Please note that the zip file has a password: Q97
Download mix from: https://www.mediafire.com/?hhc19wsztb61eyb
Posted by Chris Quartly at 12:22